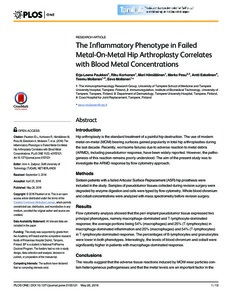 Hip arthroplasty is the standard treatment of a painful hip destruction. The use of modern metal-on-metal (MOM) bearing surfaces gained popularity in total hip arthroplasties during the last decade. Recently, worrisome failures due to adverse reaction to metal debris (ARMD), including pseudotumor response, have been widely reported. However, the pathogenesis of this reaction remains poorly understood. The aim of the present study was to investigate the ARMD response by flow cytometry approach.
Methods

Sixteen patients with a failed Articular Surface Replacement (ASR) hip prosthesis were included in the study. Samples of pseudotumor tissues collected during revision surgery were degraded by enzyme digestion and cells were typed by flow cytometry. Whole blood chromium and cobalt concentrations were analyzed with mass spectrometry before revision surgery.
Results

The results suggest that the adverse tissue reactions induced by MOM wear particles contain heterogeneous pathogeneses and that the metal levels are an important factor in the determination of the inflammatory phenotype. The present results support the hypothesis that higher metal levels cause cytotoxicity and tissue injury and macrophages are recruited to clear the necrotic debris. On the other hand, the adverse response developed in association with lower metal levels is T-lymphocyte-dominated and is likely to reflect hypersensitivity reaction.