Construction of Grand Ethiopian Renaissance Dam on the Nile : Cause for Cooperation or Conflict among Egypt, Ethiopia and Sudan 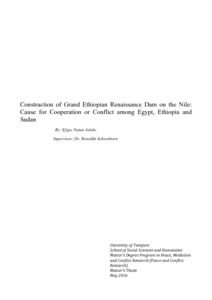 At the time of writing this thesis, the construction of Grand Ethiopian Renaissance Dam (GERD) is advancing. The controversies and cooperation over matters related to GERD are still up in the air amongst Ethiopia, Egypt and Sudan. This study investigates whether the construction of GERD induces more cooperation or conflict amongst these states. When Ethiopia initiated the GERD project in 2011, the reactions from the two downstream countries (Egypt and Sudan) were totally variegated in a way that Sudan avowed and reaffirmed its support whilst Egypt vociferously opposed the project by alleging that the dam would infringe her historical water share rights. As a result, political tensions and war threat interactions were rampant between Egypt and Ethiopia. This scenario mounted at the peak following Ethiopia s tapping of the Nile water for the dam s purpose. Later, the signature of the 2015 tripartite agreement and perpetual water diplomacy replenished their interaction. Hence, hydro-political relations amongst these states fluctuate from cooperation scenario at a time to conflictive situation at another time. That is why this study aimed to clarify the main research question- is construction of GERD causing cooperation or conflict among the Eastern Nile Basin Nations?

To entertain this question, the study employed a methodology called Framework of Hydro-hegemony as developed by Zeitoun and Warner (2006) and later updated by Cascão and Zeitoun (2010). The analysis of this framework centers itself on refining and capturing two water conflict predictions together Frey s (1993) power-analytic framework and Yoffe et.al s (2001) scale of water conflict event intensities into one so-called the framework of hydro-hegemony. The hydro-political power positions of these nations have been analyzed according to the four pillars of power positions: geographic, material, bargaining and ideation. The delve study of this research verified Egypt as the basin hydro-hegemon in material, bargaining and ideational powers while Ethiopia is leading the geographic power position owing to her upstream location. The study also reveals that Ethiopia and Sudan are progressively altering their power positions, which guaranteed them to contest Egypt´s incessant hydro-hegemony. Beyond the socio-economic benefits of the GERD, it is also served as one of Ethiopia s counter-hegemony strategies in the basin.

Moreover, the bilateral and multi-lateral interactions of these states have also been evaluated per to Yoffe et. al s water intensity scale measurement and their outcomes display moderately positive correlations.

The result of the study constitutes that the construction of GERD is progressively sprouting to open dialogue, trust building and cooperation on water share matters among these nations. This contributes a positive asset to the durability of peace and security, and integration in the Eastern Nile basin rather than provoking dispute and friction in the time period the study extends.