Short-term effects of the “Together at School” intervention program on children’s socio-emotional skills: a cluster randomized controlled trial 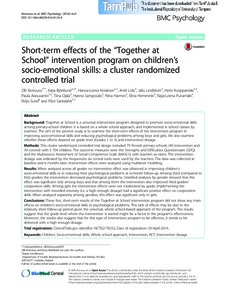 BMC Psychology 4 1
27
This publication is copyrighted. You may download, display and print it for Your own personal use. Commercial use is prohibited.

Together at School is a universal intervention program designed to promote socio-emotional skills among primary-school children. It is based on a whole school approach, and implemented in school classes by teachers. The aim of the present study is to examine the short-term effects of the intervention program in improving socio-emotional skills and reducing psychological problems among boys and girls. We also examine whether these effects depend on grade level (Grades 1 to 3) and intervention dosage.
METHODS:

This cluster randomized controlled trial design included 79 Finnish primary schools (40 intervention and 39 control) with 3 704 children. The outcome measures were the Strengths and Difficulties Questionnaire (SDQ) and the Multisource Assessment of Social Competence Scale (MASCS) with teachers as raters. The intervention dosage was indicated by the frequencies six central tools were used by the teachers. The data was collected at baseline and 6 months later. Intervention effects were analyzed using multilevel modeling.
RESULTS:

These first, short-term results of the Together at School intervention program did not show any main effects on children's socio-emotional skills or psychological problems. This lack of effects may be due to the relatively short follow-up period given the universal, whole school-based approach of the program. The results suggest that the grade level where the intervention is started might be a factor in the program's effectiveness. Moreover, the results also suggest that for this type of intervention program to be effective, it needs to be delivered with a high enough dosage.