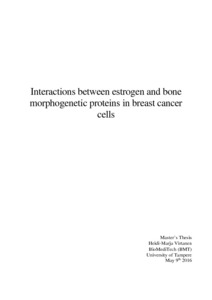 Background and aims: Breast cancer is the second most common cancer in the world after lung cancer, and the most common cancer among women. The risk factors for breast cancer include different hormonal factors and consequently, estrogen has been found to promote breast cancer pathogenesis. Bone morphogenetic proteins (BMP) are a group of growth factors that have been connected to different cancers, including breast cancer. BMPs have been noted to have different effects on breast cancer cells, decreasing proliferation in some, and in contrast, increasing migration and invasion in others. The estrogen and BMP signaling pathways have been shown to have a connection, and they can influence each other's functions. In this study, the objectives are to examine the effect of estrogen on BMP gene expression in six breast cancer cell lines, and to study the effects of estrogen and BMP4 on cell proliferation in two breast cancer cell lines.

Methods: The breast cancer cell lines (estrogen receptor positive BT-474, MCF-7, MDA-MB-361, T-47D and ZR-75-30, and the estrogen receptor negative MDA-MB-231) were cultured in estrogen free medium for three days before treatment with 17ẞ-estradiol (E2, 100 nM) or vehicle control for 24 and 48 hours. The gene expression of BMP4 and BMP7, and the positive control genes GREB1 and TFF1 was assessed with qRT-PCR by using a SYBR Green I dye based assay. For examining the cell proliferation, BT-474 and T-47D cells were cultured for three days in estrogen free conditions, and treated with E2 (100 nM), human recombinant BMP4 (100 ng/ml), both, or vehicle control. The cell proliferation was followed by microscopy and imaging, and finally by counting the cells at six (T-47D) and seven (BT-474) days after the treatments.

Results: The expression of positive control genes GREB1 and TFF1 increased after estrogen treatment in most estrogen receptor positive cell lines, as expected. Treatment with E2 had a variable effect on BMP4 and BMP7 expression depending on the cell line. BMP4 expression was notably decreased in BT-474, MCF-7 and MDA-MB-361 cell lines, but not in others. The expression of BMP7 was notably decreased in BT-474, T-47D and ZR-75-30, but again, there was no significant change in the others. The cell proliferation experiment showed that as expected, E2 increased cell growth both in BT-474 and T-47D cell line, and that BMP4 was able to inhibit the effect of E2 on cell growth.

Conclusions: Estrogen has different effects on BMP4 and BMP7 expression depending on the cell line. In some it decreases BMP expression, and in others it has no significant effect. BMP4 was able to diminish the estrogen induced cell proliferation. This is an important finding that may have clinical applicability for the treatment of breast cancer patients.