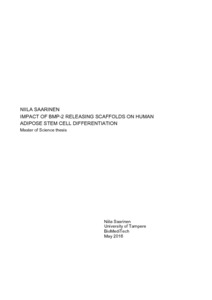 Human adipose tissue is a good source of mesenchymal (adipose) stem cells which can be used in bone tissue engineering both in studying differentiation and for treating patients. Bone morphogenetic protein 2 (BMP-2) is often used in culture medium to differentiate mesenchymal stem cells in vitro and in vivo, even thiough its efficacy has been questioned. The mechanical properties of the substrate the cells grow on have been found important to the outcome of differentiation. The aim of this study was to investigate the effects of an electrospun BMP-2 releasing polymer scaffold which enables controlled and targeted drug-release on the adipogenic and osteogenic differentiation of human adipose stem cells in vitro.

Human adipose stem cells (hASCs) from four different donors were cultured on the electrospun polymer material, loaded with BMP-2. The properties of BMP-2 scaffolds and control scaffolds (CTRL) were compared in basal medium (BM) or osteogenic medium (OM) with or without added BMP-2. The osteogenicity of the materials was evaluated using quantitative alkaline phosphatase activity assay (qALP), as well as Alizarin red staining and gene and protein expression of marker genes using quantitative real time polymerase chain reaction (qPCR) and Western blotting (WB). The proliferation and morphology of hASCs were studied using total DNA quantification and immunofluorescence respectively. The adipogenicity of the material was evaluated using qPCR as well as Oil Red O staining and fluorescence imaging.

It was found that hASCs seemed to grow in aggregates on the BMP-2 scaffolds when compared to CTRL scaffolds. The BMP-2 released from scaffolds did not significantly increase the cells' ALP activity and mineralization of ECM. Instead the BMP-2 releasing scaffolds and CTRL scaffolds seemed to bolster adipogenic differentiation based on the shape of the cells and increased intracellular fat as well as the qPCR results. However, no statistically significant differences were observed between cells grown in different conditions when the results from different cell lines were pooled. It seemed however from the morphological data that the cells grown on BMP-2 releasing scaffolds were more similar to adipocytes than osteoblasts.

It was determined that BMP-2 releasing scaffold material is more beneficial for adipogenic than osteogenic differentiation. This is probably a result of the material not being stiff enough and being too hydrophobic. It is likely that the amount of loaded BMP-2 is too low, as it was significantly lower than the concentrations regularly used in differentiation protocols.