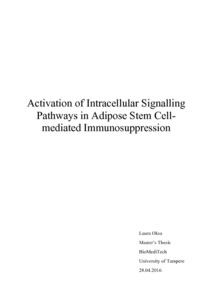 Background and aims: Adipose tissue is a source of multipotent adipose stromal/stem cells (ASCs). ASCs have excellent proliferation and multilineage differentiation capacity, low immunogenicity and promising immunosuppressive capacity. The immunosuppressive properties of ASCs have been previously studied but detailed intracellular mechanisms are still unknown. The aim of this study was to investigate the suppressive potential of ASCs in direct versus indirect co-culture with peripheral blood mononuclear cells (PBMCs) and to identify the signaling pathways (STAT3, STAT1, NF-κB and Smad1/5) that are activated during ASC-mediated immunosuppression.

Conclusion: ASCs have immunosuppressive capacity when co-cultured with PBMCs in both direct and indirect cultures. More studies with more ASC and PBMC donors are needed to obtain more detailed information about intracellular signaling behind the immunosuppression of ASCs.