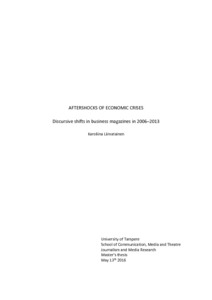 The financial crisis of 2007-2009 shook the world economically and politically. It also challenged the hegemonic discourse of our time neoliberalism. Neoliberalism is defined especially by the logic of market determinism and the logic financialisation. However, speculative behavior almost caused the global financial system to collapse. Even business magazines, which would normally support the free market, urged the governments to intervene decisively. In this thesis, Utilizing Ernesto Laclau s discourse theory, I study whether the financial crisis caused any significant and long-lasting shifts in the hegemonic discourse as it is presented in media. My research material consists of selected articles from mainstream business magazines The Economist and Businessweek from the years 2006-2013. The research material indicates that the immediate shock of the crisis did indeed make the business magazines to question the efficiency of the neoliberal hegemony. However, this shift was incomplete and only temporary. The logics of market determinism and financialisation continued to dominate after the acute danger of a global financial collapse was over.