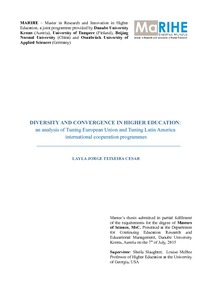 The present research focussed on how the adoption of common frameworks for curriculum redesign impacts the processes of higher education differentiation and the preservation of cultural diversity. Such debate was based on the experiences of implementation of the international cooperation programmes Tuning Higher Education Structures in Europe (Tuning EU) and Tuning Latin America (Tuning LA). The programmes were analysed drawing on the perspectives of their creators and directors.

Tuning was originally conceived in the European Union, in the year 2000. Its project is linked to the cultural and economic integration aims promoted by the Bologna Process and the Lisbon Strategy, concerning the higher education sector. Over time, Tuning has developed into an approach to evaluate quality, enhance learning mobility, and redesign curriculum, based on the common implementation of a competence-based education framework in 1st, 2nd and 3rd levels degree programmes.

Tuning Latin America was the first attempt at internationalisation developed by Tuning in the replication of its model, in 2004. The programme has now spread to other thirteen regions and countries around the world. Given its international dimension, Tuning claims to value and protect cultural diversity among participant institutions. Considering that cultural diversity and institutional differentiation are deeply intertwined, the main research question posed by the present study was: do data reveal elements indicating that the programmatic and procedural redesign proposed by Tuning affect institutional differentiation?

These possible results were verified utilising a qualitative approach. The methodology adopted was situational analysis and the method was integrative mapping. The primary data consisted of eighteen interviews with the creators and directors of Tuning EU and Tuning LA and one external specialist invited by Tuning to evaluate Tuning LA progress. The secondary data consisted of seven of Tuning's main publications regarding Tuning EU and Tuning LA experiences. In addition to those sources, the researcher observed Tuning's office in the European Union for two months, between May and June, 2014, and attended the Brazilian Tuning conference, in August 2014.

The data were analysed with the support of two main concepts: academic capitalism, when discussing the economic elements involved; and coloniality, when referring to the specificities of the relation between the European Union and Latin America. The results indicate that Tuning offered benefits to Latin America when it served as a tool to promote communication among countries in the region. Nevertheless, according to data, Tuning has presented an overall negative effect, as it contributed to the decrease of institutional differentiation. Tuning was shown to add to the convergence of programmatic and procedural institutional aspects, which could endanger cultural diversity. The conclusions point to the need for developing alternatives for enhancing learning mobility without contributing to the structural standardisation of higher education.