Horizontal transfer of β-carbonic anhydrase genes from prokaryotes to protozoans, insects, and nematodes 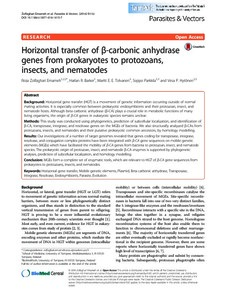 Background
Horizontal gene transfer (HGT) is a movement of genetic information occurring outside of normal mating activities. It is especially common between prokaryotic endosymbionts and their protozoan, insect, and nematode hosts. Although beta carbonic anhydrase (β-CA) plays a crucial role in metabolic functions of many living organisms, the origin of β-CA genes in eukaryotic species remains unclear.
Methods
This study was conducted using phylogenetics, prediction of subcellular localization, and identification of β-CA, transposase, integrase, and resolvase genes on the MGEs of bacteria. We also structurally analyzed β-CAs from protozoans, insects, and nematodes and their putative prokaryotic common ancestors, by homology modelling.
Results
Our investigations of a number of target genomes revealed that genes coding for transposase, integrase, resolvase, and conjugation complex proteins have been integrated with β-CA gene sequences on mobile genetic elements (MGEs) which have facilitated the mobility of β-CA genes from bacteria to protozoan, insect, and nematode species. The prokaryotic origin of protozoan, insect, and nematode β-CA enzymes is supported by phylogenetic analyses, prediction of subcellular localization, and homology modelling.
Conclusion
MGEs form a complete set of enzymatic tools, which are relevant to HGT of β-CA gene sequences from prokaryotes to protozoans, insects, and nematodes.