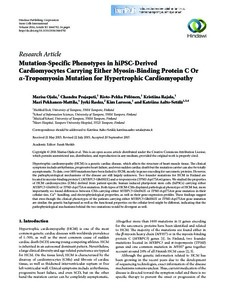 Hypertrophic cardiomyopathy (HCM) is a genetic cardiac disease, which affects the structure of heart muscle tissue. The clinical symptoms include arrhythmias, progressive heart failure, and even sudden cardiac death but the mutation carrier can also be totally asymptomatic. To date, over 1400 mutations have been linked to HCM, mostly in genes encoding for sarcomeric proteins. However, the pathophysiological mechanisms of the disease are still largely unknown. Two founder mutations for HCM in Finland are located in myosin-binding protein C (MYBPC3-Gln1061X) and α-tropomyosin (TPM1-Asp175Asn) genes. We studied the properties of HCM cardiomyocytes (CMs) derived from patient-specific human induced pluripotent stem cells (hiPSCs) carrying either MYBPC3-Gln1061X or TPM1-Asp175Asn mutation. Both types of HCM-CMs displayed pathological phenotype of HCM but, more importantly, we found differences between CMs carrying either MYBPC3-Gln1061X or TPM1-Asp175Asn gene mutation in their cellular size, Ca2+ handling, and electrophysiological properties, as well as their gene expression profiles. These findings suggest that even though the clinical phenotypes of the patients carrying either MYBPC3-Gln1061X or TPM1-Asp175Asn gene mutation are similar, the genetic background as well as the functional properties on the cellular level might be different, indicating that the pathophysiological mechanisms behind the two mutations would be divergent as well.