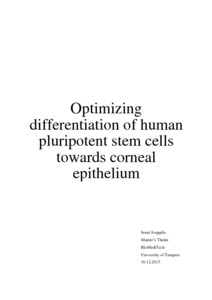 Background and aims: Limbal stem cell deficiency (LSCD) is a potentially blinding corneal disease caused by trauma, such as chemical burn, inflammation, or hereditary factors. LSCD is characterized by dysfunction of limbal epithelial stem cells (LESC) and failure of barrier function of limbus. Surrounding conjunctival tissue invades transparent and avascular corneal epithelium, which leads to vascularization and haziness. In LSCD, the surface of the eye cannot recover itself due to lack or dysfunction of LESCs so the treatment needs to bring new stem cells to continue tissue regeneration. Various approaches have been proposed to treat LSCD, some using limbal tissue transplantations from healthy eye and some have been cell-based therapies. This study presents a method developed in the Eye group at the University of Tampere, which uses human pluripotent stem cells (hPSCs) to differentiate corneal epithelial-like cells. This study's aim was to further optimize this method and test enzymatic dissociation method for stem cells.

Methods: In this study, cell differentiation was repeated six times. In every experiment, hPSCs were dissociated from feeder cells either mechanically or enzymatically. The cells were suspension cultured in small molecule and growth factor supplemented induction medium as embryoid bodies (EBs). After seven-day induction, the cells were plated to well plates, which were coated with collagen IV or surface x. The adherent cell culture lasted 21 days. Cells were analyzed with immunofluorescence at midpoint and end point of the experiments, to identify either LESC-like cells or corneal epithelial cells.

Results: Mechanical and enzymatic dissociation methods both worked as detaching methods. Enzymatic dissociation gave partially better cell numbers than mechanical dissociation. EBs survived better in suspension culture when the growth area was smaller. Collagen IV and surface x both worked as growth surface but cell numbers were better with surface x. In adherent cell culture, the growth area proved to be important, because cells seemed to suffer from overcrowding. At the end point of the experiments, there were cells positive for both LESC and cornea epithelium markers.