The economics of secession: theory and empirics 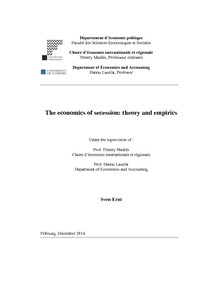 Secessionist movements are mainly fuelled by religious or historical determinants. Nevertheless, it is rare to find such movements that are also not propelled by economic factors. This paper deals with the economic factors influencing the probability of secession at national or sub-national level. First, the theoretical chapter presents the economic analysis of the formation and breaking up of countries based on the seminal model of Alesina and Spolaore (1997). I present several economic perspectives as boundaries in an ideal world where the number and size of states were determined to maximise total benefits minus total costs (efficient borders), boundaries determined by voters (democratic outcomes), boundaries with economic integration and boundaries in a world of Leviathans (rulers as monarchs or dictators). In addition, I expose some extensions where some of the main assumptions have been relaxed mainly the nature of borders and heterogeneity of jurisdiction.
Secondly, the empirical chapter introduces some studies regarding the economic factors presented in the theoretical part. Indeed, I find strong result of the basic trade-off between heterogeneity and economies of scale. Moreover, the empirical results are mixed regarding the link between economic globalization and secession. Finally, I found that fiscal decentralisation increases the probability of ethnic conflict when there exists disparities in income between regions.