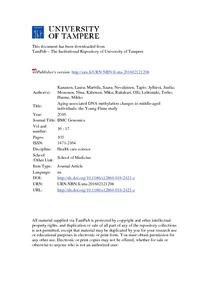 BMC Genomics 16 17
103
This publication is copyrighted. You may download, display and print it for Your own personal use. Commercial use is prohibited.

Chronological aging-associated changes in the human DNA methylome have been studied by multiple epigenome-wide association studies (EWASs). Certain CpG sites have been identified as aging-associated in multiple studies, and the majority of the sites identified in various studies show common features regarding location and direction of the methylation change. However, as a whole, the sets of aging-associated CpGs identified in different studies, even with similar tissues and age ranges, show only limited overlap. In this study, we further explore and characterize CpG sites that show close relationship between their DNA methylation level and chronological age during adulthood and which bear the relationship regardless of blood cell type heterogeneity.
Results

In this study, with a multivariable regression model adjusted for cell type heterogeneity, we identified 1202 aging-associated CpG sites (a-CpGs, FDR < 5 %), in whole blood in a population with an especially narrow age range (40 - 49 years). Repeatedly reported a-CpGs located in genes ELOVL2, FHL2, PENK and KLF14 were also identified. Regions with aging-associated hypermethylation were enriched regarding several gene ontology (GO) terms (especially in the cluster of developmental processes), whereas hypomethylated sites showed no enrichment. The genes with higher numbers of a-CpG hits were more often hypermethylated with advancing age. The comparison analysis revealed that of the 1202 a-CpGs identified in the present study, 987 were identified as differentially methylated also between nonagenarians and young adults in a previous study (The Vitality 90+ study), and importantly, the directions of changes were identical in the previous and in the present study.
Conclusions

Here we report that aging-associated DNA methylation features can be identified in a middle-aged population with an age range of only 9 years. A great majority of these sites have been previously reported as aging-associated in a population aged 19 to 90 years. Aging is associated with different types of changes in DNA methylation, clock-like as well as random. We speculate that the a-CpGs identified here in a population with a narrow age-range represent clock-like changes, as they showed concordant methylation behavior in population spanning whole adulthood as well.