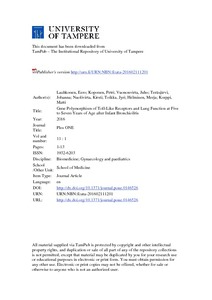 Toll-like receptors (TLR) play a crucial role in innate immunity, protecting the host from pathogens such as viruses. Genetic variations in TLRs have been associated with the severity of viral bronchiolitis in infancy and with the later occurrence of post-bronchiolitis asthma. The aim of the present study was to evaluate if there are any exploratory associations between TLR gene polymorphisms and lung function at 5 to 7 years of age in former bronchiolitis patients.
METHODS:

Among the nine studied TLRs, only TLR7 rs179008 showed some exploratory associations with post-bronchiolitis lung function deficiency, and polymorphisms of TLR4 rs4986790, and TLR6 rs5743810 in particular, with airway reactivity. These findings call for further confirmatory studies.