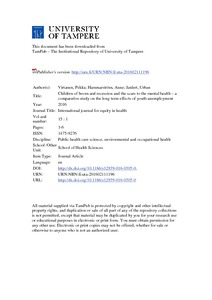 International journal for equity in health 15
14
This publication is copyrighted. You may download, display and print it for Your own personal use. Commercial use is prohibited.

The sample consists of two cohorts from the same industrial town in Northern Sweden: the cohort born in 1965 and the cohort born in 1973 included all pupils attending the last grade of compulsory school, respectively, in 1981 and in 1989. Their depressiveness and anxiousness were assessed by questionnaires at age 21 and again at age 43/39. Mental health at follow-up was related to exposure to unemployment during age years 21-25. Statistical significance of the cohort*exposure interactions from binary logistic regression analyses were used to assess the cohort differences in the mental health between Cohort65 and Cohort73, entering the labour market, respectively, during a boom and a recession.
RESULTS:

The scars of unemployment exposure onto future health seem to be rather insensitive to economic trades. Thus, at the population level this would mean that the long-term health costs that can be attributed to youth unemployment are more widespread in the generation that suffers of recession around the entry to the work life.