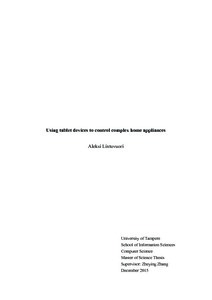 There is a literature review about available controlling technologies and usability heuristics related to tablet and mobile devices. An Android test application was created and tested with four test users to find out how well those heuristics work and are covered. That application was tested against the regular user interface of a dishwasher and task completion times and errors were noted down. Test users were asked to answer a questionnaire regarding the heuristics and how well the implementation performed.

Tablet devices should be evaluated using regular usability heuristics, but besides them they require mobile specific heuristics, such as easy of input, screen readability and glancability, physical interaction and ergonomics and privacy and social convention taken into account.

The results showed that a tablet user interface was able to outperform its regular counterpart in task completion times and in number of errors. The implementation also covered those heuristics in a more comprehensive way. But among test persons the most benefit was with users who were familiar with tablets and not with dishwashers. A test user who wasn t familiar with tablets but was with dishwashers performed tasks faster and with fewer errors with regular user interface.