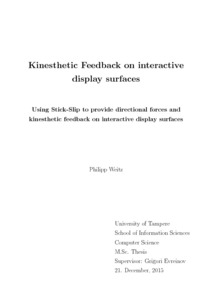 Modern interactive surfaces and displays provide powerful and highly efficient visual and auditory human-computer interfaces. However, the usage of haptics is still in its infancy. Often limited to primitive vibrotactile warning or notification signals, the possibilities of haptics to communicate complex images and information have not yet been realized. Based on research done in previous years, new methods have been developed to deliver more specific tactile information about objects and their surfaces. Nevertheless, the kinesthetic sense, which enables to detect different object properties such as weight, inertia and impedance, is rarely discussed as a part of a haptic system. Relying on kinesthetic information has been proven to be beneficial in order to detect, recognize and interpret haptic images in the virtual world. This has been achieved by using linkage-based multi-dimensional manipulators, exoskeletons or robotic arms. Based on the increased usage of mobile devices, new challenges are arising, especially considering linkage-free technologies. To approach this challenge, this thesis describes a system which is able to apply directional forces, linkage-free to a stylus tip, in order to control user behavior. The stick-slip phenomenon has been used as the basic technique to deliver directional forces in the absence of kinematic chains and mechanical linkages. Based on the theoretical approach, the prototype requirements were specified and the configuration of the system (mechanical components, actuators and control parameters) were discussed. By using the resulting system specification, three mockups were developed which led to a final system implementation. During the course of this research, it was demonstrated that it is possible to generate directional forces on an interactive display in order to move a stylus linkage-free over the touchscreen in a fully controlled and efficient manner. The technology described in this thesis opens new possibilities for interacting with displays. The developed system can be used to provide continuously-supervised learning or feed forward systems which predict the user behavior and modify kinesthetic signals.