A Door Ajar to a Perception of the Silent Majority: Political Activities of the Russian Language Minority in the Helsinki Metropolitan Area 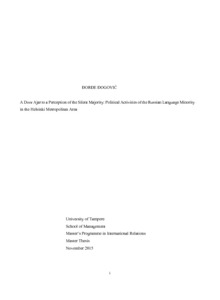 The political and social activities of the Russian language minority (RLM) in Finland or in the Helsinki metropolitan area (HMA) until now, has not been the subject of any academic study. Moreover, my experiences from this study show them to be somewhat a taboo. Through a constructivist "self-other dichotomy" related theory of identity and interest formation, this thesis investigates the political and consequently social activities of the RLM in the HMA. This study treats the notion of "minority" through an idea and process of construction from the Anarchy level and a grass-roots level of existence within a resident state. Moreover, the Anarchy level is highlighted by challenging Alexander Wendt s theory on state identities along the Westphalia lines. Equally, at a grass-roots level using the "self-other dichotomy" the political and consequently social activities of the RLM are explored as well as its existing ideology.

The methodology used in preparing this thesis is a three-fold approach based on qualitative research. Firstly, using open-ended semi-structured questions on a one to one basis with three expert professionals involved in the daily affairs of the RLM. Secondly, twenty-eight web-based, open-ended semi-structured interviews with members of the RLM. Finally, using Ideological Discourse Analysis, it draws upon a combination of Cognitive, Social and Discourse dimensions of the self-other "ideological square" as well as textual analysis. All the above mentioned compose a comprehensive picture of the self-other dichotomy related to the RLM.

The main outcome, in the identification of the political motivation of the RLM is the scale of five different discourses: Glass Ceiling, I say ¡No Pasarán!, We are Sui Generis , Our Perception, to be continued and Isolation . Furthermore, as a product of construction process the RLM s delimitation lines appear as well as their downplay via the same process with a reversed vector. Finally, an anti-discriminatory or anti-xenophobic ideology resurfaces from the empirical data through the Ideological Discourse Analysis.