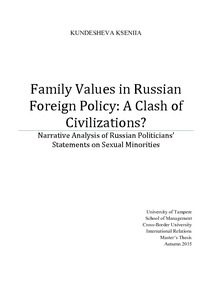 Respect for the rights and freedoms of Russian citizens belonging to LGBT (gay, bisexual and transgender people), is an important problem in modern Russia. According to human rights activists, the adoption of laws against the "promotion of homosexuality" has been the most disturbing development in recent years regarding the rights of LGBT people in Russia. Russian politicians explain the necessity of such laws with reference to the fight against debauchery and the desire to protect the health and morals of children. They evoke family values. The UN Committee on Human Rights has found that such laws violate the International Covenant on Civil and Political Rights. According to human rights treaties, the law banning "propaganda of homosexuality" violates the right to freedom of assembly, the right to freedom of expression and other rights. Moreover, the treatment of LGBT people in Russia has caused tension and foreign policy clashes in Russia s relations with other countries.

This thesis asks whether the foreign policy clash over the treatment of LGBT people makes sense in the context of Samuel Huntington s theory of the clash of civilizations, Does Huntington s theory work here? I will thus examine whether the narratives of Russian politicians discussing the treatment of the LGBT community in Russia can be treated as instances of civilizational identity building. As the narratives are not homogeneous it argued that this is not only confrontation between purely Western values and values unique to Russia but also a confrontation within the state, where citizens or mostly policy makers consider this issue from the different points of view.

The key primary sources of this thesis are Foreign Affairs documentations, comments and interviews by a set of Russian politicians. As a research method, the thesis uses narrative method. Several documents are compared with each other to find points of contact and separation, and the main task is to find whether a civilizational difference underlies this debate.