Securing energy, threatening lives. An interpretative analysis of the energy security concept through the "logic" of exceptionalism 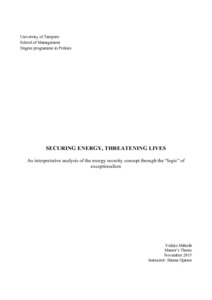 In this thesis, I will study the production of the concept of energy security through what I have named as the "logic" of exceptionalism theoretical approach. The purpose of my study is to problematize the naturalised energy security conceptualisation, which orders energy security policies and research. I will argue that rather than being something that we know, energy security has been produced in a historical context as a conceptual way to protect the interests of energy consuming states, particularly the United States, which simultaneously excludes not only millions of people outside the modern energy security network by naming them energy "poor", but also depoliticises their insecurities, which the aims for modern energy security produce.

The "logic" of exceptionalism, as a theoretical framework, focuses on how events have been made exceptional to justify political decisions and practices that enforce particular order and conceptualisation of a social issue, in this case energy security. The "logic" of exceptionalism approach studies this through three processes: securitisation, normalisation and depoliticisation. The theoretical framework is supported by constructive conceptual analysis, which emphasises the importance of studying the context of concepts, rather than seeing them as they supposedly are. The data of the study will consist of academic literature on the conceptual and social history of energy security, and case study material on Xayaburi dam in Lao People's Democratic Republic.

The analysis of the energy security history shows that the contemporary energy security understanding has been based on two principles: the maintenance of the sovereignty of the energy consuming states and upholding modernisation, continuous economic development and consumerism. These normative principles were securitised, normalised and depoliticised in the 1970s, when the oil crisis and the competing energy security order of the Organisation of the Petroleum Exporting Countries (OPEC) threatened the unwritten national (energy) security order of the developed energy consumer states. As the security of supply was institutionalised, the built global energy order excluded both the energy producers and the people that were later named the energy "poor". This normalised energy security conceptualisation not only guides the policy-making and actions of states, but it also exclude the energy poor, who are not seen part of the modern energy security. Particularly the Xayaburi dam case study shows that the energy poor have been subjugated to severe insecurity, as they have been expulsed due to the assumed energy security that the dam construction will bring to Southeast Asia, especially to Thailand.