Genetic Variants on Chromosome 1p13.3 Are Associated with Non-ST Elevation Myocardial Infarction and the Expression of DRAM2 in the Finnish Population 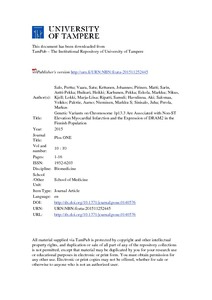 Myocardial infarction (MI) is divided into either ST elevation MI (STEMI) or non-ST elevation MI (NSTEMI), differing in a number of clinical characteristics. We sought to identify genetic variants conferring risk to NSTEMI or STEMI by conducting a genome-wide association study (GWAS) of MI stratified into NSTEMI and STEMI in a consecutive sample of 1,579 acute MI cases with 1,576 controls. Subsequently, we followed the results in an independent population-based sample of 562 cases and 566 controls, a partially independent prospective cohort (N = 16,627 with 163 incident NSTEMI cases), and examined the effect of disease-associated variants on gene expression in 513 healthy participants. Genetic variants on chromosome 1p13.3 near the damage-regulated autophagy modulator 2 gene DRAM2 associated with NSTEMI (rs656843; odds ratio 1.57, P = 3.11 × 10−10) in the case-control analysis with a consistent but not statistically significant effect in the prospective cohort (rs656843; hazard ratio 1.13, P = 0.43). These variants were not associated with STEMI (rs656843; odds ratio, 1.11, P = 0.20; hazard ratio 0.97, P = 0.87), appearing to have a pronounced effect on NSTEMI risk. A majority of the variants at 1p13.3 associated with NSTEMI were also associated with the expression level of DRAM2 in blood leukocytes of healthy controls (top-ranked variant rs325927, P = 1.50 × 10−12). The results suggest that genetic factors may in part influence whether coronary artery disease results in NSTEMI rather than STEMI.