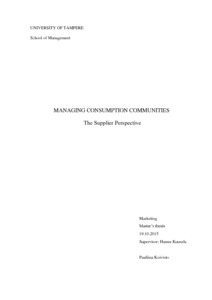 Communal consumption has lately received abundant research attention. Nevertheless, consumption community management has not been studied very widely in the discipline of marketing. In particular, there are very few community management studies that examine the phenomenon from the perspective of the community supplier. Because the present study adopts this scantily studied perspective, it employs an abductive research approach. In order to give much emphasis on the empirical data, the researcher did not use any specific preselected theoretical framework to classify the findings. However, existing consumption community literature was broadly examined to create preliminary understanding, to provide theoretical background information and to support the researcher's interpretation.