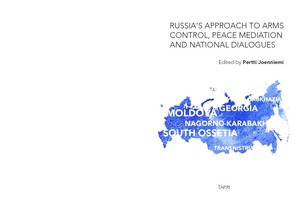 As one of the major actors on the scene of international politics, Russia also impacts the various efforts of arms control, conflict settlement and mediation. This pertains to issues such as the Syrian conflict, nuclear proliferation in the case of Iran or various conflicts part of the post-Soviet space. Success or failure in these efforts has considerable significance for the conduct of international relations, including Russia’s own standing on the international scene. In particular, the approach adopted has impacted the chances of capitalizing on regionalization as an asset potentially bolstering Russia’s weight and influence.

In addition to outlining the Russian approach to arms control, conflict settlement and mediation more generally, the various contributions included in the book set out to probe the policies pursued in the case of specific conflicts such as those unfolding in the Southern Caucasus as well as Moldova. In this context the only resolved post-Soviet conflict consists of that pertaining to Tajikistan whereas all other may be described as ‘frozen conflicts’.

Particular attention is devoted to the case of Nagorno-Karabakh and the various efforts to address and settle that conflict. Out of the various ‘frozen’ conflicts part of the post-Soviet space, it stands perhaps out as the ‘hottest’ one, although competes for attention and need of analysis with other conflictual issues in the region.