Resources and constraints of line manager agency in municipal reforms 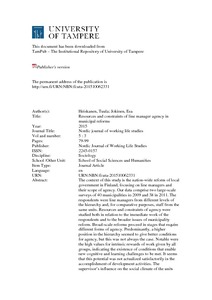 The context of this study is the nation-wide reform of local government in Finland, focusing on line managers and their scope of agency. Our data comprise two large-scale surveys of 40 municipalities in 2009 and 38 in 2011. The respondents were line managers from different levels of the hierarchy and, for comparative purposes, staff from the same units. Resources and constraints of agency were studied both in relation to the immediate work of the respondents and to the broader issues of municipality reform. Broad-scale reforms proceed in stages that require different forms of agency. Predominantly, a higher position in the hierarchy seemed to give better conditions for agency, but this was not always the case. Notable were the high values for intrinsic rewards of work given by all groups, indicating the existence of conditions that enable new cognitive and learning challenges to be met. It seems that this potential was not actualized satisfactorily in the accomplishment of development activities. The supervisor’s influence on the social climate of the units was evident in the longitudinal setting. From the perspective of distributed agency, this result is highly significant when one considers that the social environment is the immediate context of agency.