Discourse and myth in contemporary Russia: the Great Patriotic War and the Victory Day narrative 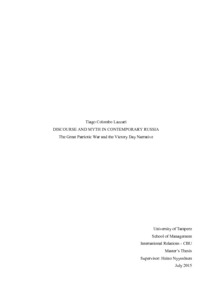 This research uses discourse analysis to investigate the importance of the Victory Day ritual and its symbolism in modern Russia. Commemorated on May 9, the Victory Day marks the end of the Second World War, which entered in the history of the Soviet Union as the Great Patriotic War. This version of the conflict not only emphasises the suffering and heroism of the Soviet people, but also presents the Victory over the enemy as an essential element of its narrative. Given its dimensions, this account became a central aspect of the country's post-war identity. The Russian Federation, as the official successor of the Soviet Union, adopted the Victory Day as one of its most important holidays, in particular since the rise of Vladimir Putin to power in 2000. The main postulate of this research is that the Great Patriotic War and the Victory were elevated to a mythical status in Putin's Russia. From my theoretical perspective, myths are the ultimate carriers of symbolism within a community, and therefore bear authority to regulate its social practices. Historical myths present a double-structure: a temporal one, related to the past event, and an atemporal one, whose importance is ever-present in its community as an authoritative account. In Russia, the War/Victory myth functions as a mediator between two discursive practices: that of the country's national identity and that of its political leadership.

In analysing these three layers of discourse (the national identity, the ritual, and the political leadership), this research aims at understanding how the ritual has been raised to this mythical status, and how it operates in connecting the country's elite with its population. As such, four questions are considered: "how has the discourse on the Great Patriotic War/the Victory, and in particular its relevance, evolved from 2000-2015? Which are the underlying and explicit elements (practices) structuring this discourse (what is the myth)? How do these elements relates to the meanings present in the 'national' and the 'political' levels of discourse? How do they interact with concrete political circumstances?" In order to answer these questions, this research departs from the poststructuralist perspective of the Essex School of discourse analysis, as proposed by Ernesto Laclau and Chantal Mouffe. By regarding political struggle as a competition for the hegemony of a society's discursive field, this school focuses on how meanings are articulated in this process. As such, this research systematically analyses two annual speeches delivered by the Russian head of state during the Victory Day commemoration. Moreover, it relates these official statements to Russia's political context of the fifteen years analysed.

This study concludes that the mythical narrative gained prominence as its concrete external references became increasingly replaced by elements emphasising the importance of the narrative itself. This process took place on the course of the period analysed, as Russia's social and political questions became increasingly associated to the mythical narrative embodied during the 9 May ritual.