Cost-Effectiveness of Physical Activity among Women with Menopause Symptoms: Findings from a Randomised Controlled Trial 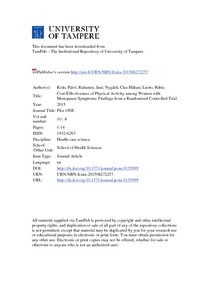 Plos ONE 10 8
1-14
This publication is copyrighted. You may download, display and print it for Your own personal use. Commercial use is prohibited.

Menopause is a period that may predispose one to a decrease in muscle strength, cardiorespiratory fitness, and quality of life. A study was carried out to evaluate the cost-effectiveness of physical activity among women displaying symptoms of menopause. The cost-effectiveness analysis was based on data from a six-month randomised controlled trial (n = 151). The women in the intervention group engaged in an unsupervised session of at least 50 minutes of physical activity four times a week. The control group continued their physical activity as before. An incremental cost-effectiveness ratio (ICER) was calculated in terms of maximal oxygen consumption, lean muscle mass, and quality-adjusted life years (QALYs) gained. A bootstrap technique was utilised to estimate uncertainty around the point estimate for ICER associated with the intervention. The mean total cost in the intervention group was €1,307 (SEM: €311) and in the control group was €1,253 (SEM: €279, p = 0.10) per person. The mean intervention cost was €208 per person. After six months of the behaviour-change intervention, the ICER was €63 for a 1 ml/kg/min improvement in cardiorespiratory fitness, the additional cost per one-gram increase in lean muscle mass was €126, and the cost per QALY gained was €46. According to the findings, physical activity among menopausal women was cost-effective for cardiorespiratory fitness, for lean muscle mass, and for QALYs gained, since the intervention was more effective than the actions within the control group and the additional effects of physical activity were gained at a very low price. From the societal perspective, the intervention used may promote ability to work and thereby save on further costs associated with early retirement or disability pension if the physical-activity level remains at least the same as during the intervention.