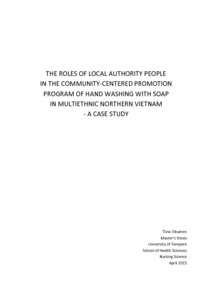 The aim of the study was to examine the roles of the local authority people who acted as core group members (CGMs) in the pilot phase of the community-centered hand washing with soap (HWWS) promotion program which was carried out in a multiethnic Lao Cai province in Vietnam 2014. The special interest of the study focused on CGMs’ official role and how their role appeared in practice but also their and communal leaders’ point of view about acting as a CGM enhancing HWWS in their communities. The goal was to produce information which helps to utilize the CGM role as effective as possible in this program and the local authority people in activities that promote hygiene behavior change in developing countries.

The primary informants of the study were CGMs themselves (n=18). The positions of the CGMs were the village health worker and the head of the women’s union or a similar authority and they were together responsible for carrying out project activities in their own village community. Other informants were the communal leaders (n=4) who were responsible for the local management of the project. The material was collected by studying the project documents, by observing the realization of the project activities and by interviewing the above-mentioned informants. The material that was collected in different sources was analyzed qualitatively with the content analysis.

The CGMs were equipped to the task by offering them two one-day training courses and a comprehensive handbook which contained information and instructions for the carrying out of the project. Only half of the CGMs participated in both training courses. The main methods of promoting HWWS in the community were group meetings and household visits. The project activities were in practice carried out less often than recommended and the implementation deviated from the given instructions also in other respect. In the majority villages the necessity of the project was experienced as questionable whereas especially in the poor highland villages it was seen very necessary but the difficult conditions complicated the carrying out of the project.

In conclusion, it can be stated that the project and its methods were suitable in the context but there was a remarkable difference between the official and the practical role. The guidelines of the project need some reassessment but it is primarily essential to ensure all CGMs decent orientation to the task. The effectiveness of the project relies on motivated and skilled CGMs who have been equipped with sufficient resources. At the following phase, the project should focus on the poorest villages where HWWS is not a general practice yet and special attention should be paid to the supporting and resourcing CGMs in those settings.