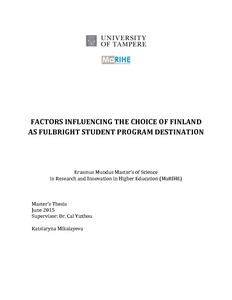 This work is the first academic study to investigate the factors influencing the choice of a Fulbright destination by U.S. Student Program grantees. While the topic of international education destination choice has been given a lot of attention in higher education research in the past two decades, this distinct group of international students has not been previously examined. Focusing on Finland as a Fulbright destination, this study seeks to identify factors that determined the choice of the country as a destination of graduate study and research.

The study employed sequential mixed methods design consisting of a survey of U.S. Student Program grantees to Finland from years 2000 to 2015 and follow-up interviews with eight survey respondents. A Model of Fulbright Destination Choice was created specifically for this study with the goal of exploring the factors influencing the choice of Finland as a Fulbright destination. The study revealed that quality of education in Finland, it's academic reputation, quality of research at Finnish higher education institutions, expertise of academic staff, quality and suitability of academic programs, and a scholarly interest in Finland were considered the most important factors in the choice of the country as a Fulbright destination. In addition, the higher acceptance rate into the Fulbright Program was recognized as a major factor of influence in the decision to choose Finland. Level of safety and security in the country and its development level were regarded as most significant social aspects guiding the choice. The research also demonstrated that previous encounters with Finland greatly influenced the choice of the country as a destination of graduate study and research. Among the conceptualized set of factors proposed by the theoretical framework of this study, the program dimension of choice was found to be the most significant component in the choice of a Fulbright destination.