Academic leaders' views of the role of organizational culture in implementing management innovation : the case of Bahir Dar University, Ethiopia 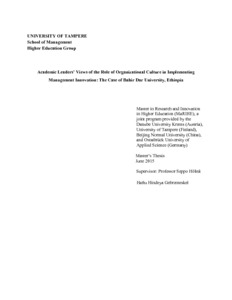 Organizational culture (OC) is one of the key elements to the success of innovations in universities. The main challenge in universities is, however, building a culture that embraces and sustains innovations. Taking selected dimensions of OC as a guiding framework and qualitative case study as a research design, this study tries to understand academic leaders’ conception of OC, and its role on the implementation of management innovation (BPR). Data collected using interview from purposefully selected academic leaders and relevant documents are thematically analyzed. The results reveal lack of common understanding of OC among leaders. Though all leaders unanimously agree that OC is very decisive for organizational success, they agree neither in its definition nor what elements it constitutes in their university context. The study shows that leadership as a dimension of OC has been playing marginal role. Leaders report presence of poor understanding of innovation, low commitment and sense of ownership, disconnection between middle and top level leaders, uncertainty and lack of follow-up of implementation, and reporting for conformity. In addition, presence of poor interpersonal relationships, lack of systematic handling of conflicts, low degree of risk taking behavior and flexibility are reported. All academic leaders have gloomy picture of the university’s core values as they are not intentionally translated into practice. A common view held amongst leaders is that there is clash between old and desired culture, and less effort has been made to reconcile new managerial values with traditional ones which later pose difficulty to live up to the underlying principles of BPR. The degree of involvement in decision making is reported to be inadequate. Leaders agree that there was inadequate debate and reflection before and during implementation. All agree that OC has been barrier in the process of implementation. Based on the results, implications for practice are suggested.