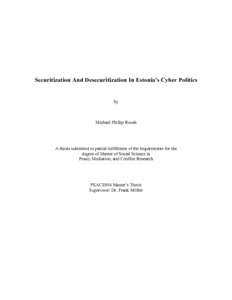 In response to the 2007 cyber attacks on Estonia's critical cyber infrastructure there have been a wealth of documents produced by Estonian government ministries and the NATO Cooperative Cyber Defence Center of Excellence that address the topic of cyber security. This thesis examines the concept of desecuritization within the Copenhagen School's Securitization Theory and the Estonian discourse on cyber conflict following the 2007 attacks. The overall aim of this thesis is to investigate some of the major public policy documents that were published by the Estonian government ministries and the NATO CCDCOE that address the issue of cyber conflict in order to assess the movement of the discourse generated by the public policy documents towards securitization or desecuritization. Through the methodological approach of discourse analysis, the documents evidenced a general trend towards securitizing movement throughout the examined period of 2008 to 2014. However, based on the theoretical conceptualization of desecuritization and its application to portions of the documents' discourse, the potentiality of desecuritizing movement within Estonian cyber politics was evidenced. As a derivative of the findings in this thesis, a shift in the paradigm for the study of cyber conflict is proposed for future research. In particular, the employment of the desecuritization concept as a tool in which to analyze political discourse is emphasized as an initial step for researchers to alternatively study threat perception and security as it relates to cyber conflict. In addition to this, it is also proposed that the theorization of cyber peace building, as an associated concept to cyber desecuritization, be further analyzed in future research studies.