South Karelia as a Competitive Tourist Destination : Geo-economic Insights for Tourism Development from the Finnish-Russian Border 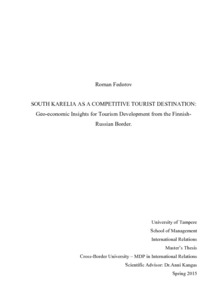 Tourism development in peripheral and border areas has become a key regional development driver, and the case of South Karelia is an outstanding example of the phenomenon. In the last two decades, the impact of Russian tourist inflow on economy and development has been constantly growing. However, in a globalized volatile world it becomes more difficult to keep up with growing competition both inside the country and internationally. In order to maintain competitiveness, a cross-border region has to pursue the aim or releasing the potential of a destination with consideration of all related factors. Michael Porter theory of competitive nations and regions, as well as Diamond Model provides a comprehensive set of guidelines how the issue should be approached, with respect to political dimension. Geo-economic assumptions concerning the spatial aspect of competition add clarity to the picture and link the topic to transformations in international relations.

The case was approached by using a multi-method approach of triangulation. A series of semi-structured interviews with South Karelian tourism stakeholders was conducted to provide a comprehensive insider view on a range of questions concerning the topic. Online survey was designed with a purpose to uncover Russian tourist’s preferences, motivations and thoughts concerning the attractiveness of South Karelia as a destination. Participant observation was utilized to add personal perspective on the issue, as the researcher has a 7-years experience of tourism in the area. Gathered data and findings were presented in a form of SWOT-analysis, which could be applied by South Karelian tourism stakeholders in strategic planning and operations.

The case of South Karelia demonstrates the principles of Porter’s theory in action. Masterful management and governance of South Karelia, combined with strong prerequisites for tourism development, enhances the performance of the region and turns its comparative advantages into competitive. The border region proves to be shock-resistant and prosperous due to balanced focus on its strong and weak sides, and determinacy to advance in development.