Understanding the War Experience of Adolescents : the Role of Forgiveness and Future Prospect 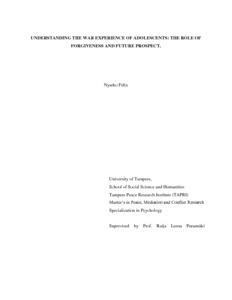 The fourteen year Liberian civil war left in its wake a disenchanted citizenry most of whom sought refuge in neighbouring countries and elsewhere.

The purpose of this study was to understand the war experience of adolescents, the role of forgiveness and future prospects among Liberian young adults at the Buduburam Refugee Camp in Ghana.

The study employed a qualitative approach where semi-structured interview were conducted among thirteen (13) Liberian war survivors. They lived in Ghana and were 25-35 years of age. A phenomenological approach was used in analysing the data.

The findings revealed themes which demonstrate that civil war had a variety of impacts on them. Partly the experiences were painful, involving witnessing atrocities and abuses, loss of parents, reliving the memories of the war, and hardships. The results also indicated that in spite of their traumatic past some exhibited resilience and optimism about the future. The stories showed a great effort to reconstruct their shattered lives yet others finds no meaningful purpose in life. The participants analysed possibilities to forgive their offenders or persecutors in various ways. The basis were for example, religious belief, apology, justice, personal choice and influence by revered leaders.