"We do right, we don't do nice" : pragmatizing markers in rhetoric of political leaders in Russia and Germany - a critical comparative analysis, 2005-2015 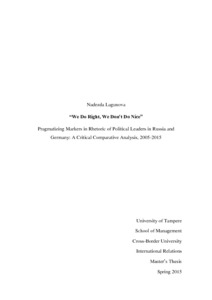 The phenomenon of pragmatic decisions is widely used by current political leaders to prove their foreign policy actions as the right ones, as illustrated by the discourses of German and Russian officials. But still the ‘pragmatic’ explanation does not result in the same decisions in these two states. This contradiction suggests that pragmatism is nothing but a rhetorical tool, which might be used differently.

This thesis focuses on the rhetorical tools by means of which leaders of Russia and Germany pragmatize their foreign policy choices. Also the thesis is aimed to figure out the differences in the ways of pragmatization applied by Russian and German actors.

The Aristotelian doctrine of practical syllogism, which is considered here as mechanism of pragmatization, discloses these rhetoric tools that are called ‘pragmatizing markers’. The rhetorical analysis revealed five groups of these markers: profit, right and thought, institutionalism, humanism, and ideal speech situation (ISS). Moreover, it showed that the conditions under which the decision is made (cooperation; different point of view; conflict) may affect the choice of pragmatizing markers.

Comparative analysis showed that Russian and German actors have some common spaces as well as difference in applying the pragmatizing markers. Both use all five groups of the markers to some stance. The cases of conflict and different points of view urge the actors to resort to the model of ISS, while the case of cooperation is the most favorable for the marker of profit. In the conditions of conflict, the use of pragmatizing marker of right and thought significantly increases in both countries. As for the differences, Russian political leaders make their rhetoric more variable in cases of cooperation and different point of views and German ones does it in case of conflict. In addition, Russian actors tend to pragmatize with the help of institutional value, while German representatives prefer the value of humanism, which can be traced through the cases of conflict and differing points of view.