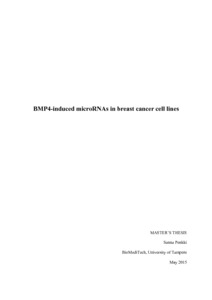 Background and aims: Breast cancer is the leading cause of mortality in women worldwide. In cancer, deregulation of signaling pathways, such as of the growth factor BMP4, is a common phenomenon. BMP4 is known to have a dualistic role in breast cancer, as it simultaneously decreases cell growth, but also increases migration and invasion. miRNAs are small regulators of several important cellular processes, and they have also been linked to cancer. Here, I wanted to study if microRNAs (miRNAs) partly affect these phenotypes.

Methods: The expression level of eight miRNAs after BMP4 treatment was studied in seven breast cancer cell lines and in one immortalized breast epithelial cell line using qRT-PCR. In the functional studies cell growth and migration were studied in two cell lines using proliferation assay and scratch assay, respectively. However, cell migration was studied only in MDA-MB-231 cells. For the proliferation assays, cells were treated with BMP4 and anti-miR inhibitors and the cells were counted at two time points, four and six or seven days after seeding. In the scratch assay a scratch was introduced to a confluent monolayer of cells and the closure area was measured at two hours’ intervals until the scratch closed up.