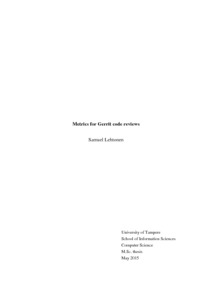 Code reviews are a widely accepted best practice in modern software development. To enable easier and more agile code reviews, tools like Gerrit have been developed. Gerrit provides a framework for conducting reviews without physical meetings or mailing lists. In large software projects, tens or even hundreds of code changes are uploaded daily and following the code review process becomes increasingly hard for managers and developers themselves.

To make monitoring the review process easier, this thesis introduces review metrics for Gerrit code review. The metrics can be used, for example, to follow the amount of code changes and how long each activity within the review process take.

The metrics were implemented in a case company and data was collected from few different projects. The metrics were crafted based on measurement goals that were defined after conducting desk research on existing metrics and code review practices and after interviewing developers and managers.

The most notable benefits of the metrics are the ability to recognize the most time consuming areas of Gerrit code reviews and the simplicity to monitor the total amount of open changes. The review and code change quality can also be measured with the metrics by calculating the amount of positive and negative reviews given and received by developers.

By collecting data with the metrics new best practices for Gerrit code reviews can be established. With the help of the metrics, weaknesses are identified and the process can be optimized. Metrics can also be used to motivate developers for better performance when the metrics are publicly available for developers to see their own performance.