Kaliningrad vs. Königsberg: The Role of the Renaming Discussion for the Formation of the Kaliningrad Regional Identity 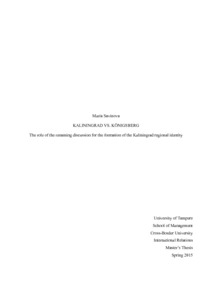 This thesis is dedicated to studying the current processes of the Kaliningrad Region's identity transformation by examining debates over restoration of Kaliningrad's historical name, Königsberg in regional media. The aim of the study is to find out how does the regional media contribute to the renaming debate, and how is the regional identity transformed within the discussion in the media. The material for the analysis is a collection of 24 articles from 5 regional media sources published in January-April 2013. Articles are examined using Fairclough's three-dimensional concept of analysis of media texts.

This work provides an introduction into the socio-cultural background of the topic. It thoroughly investigates how text producers use genre of "letters to the editor" to influence their audiences in a certain way. It discovers the political dimension of the renaming debate by looking at standpoints of various political actors and their representations in the media texts. It defines central topics within the renaming discussion and examines argumentation of renaming supporters and their opponents. It identifies discourses influencing the process of transformation of the Kaliningrad Region's identity.

The study has shown that some of regional media outlets prefer to keep the status quo, while others are interested in the further development of the renaming debate. The latter are trying to introduce new topics and fresh opinions to their audience. The analysis of argumentation has shown that some arguments have already lost their persuasive power since the beginning of the discussion in 1991, while new arguments are entering the scene. The most influential discourse is the discourse of Europeanness, which central idea is to become as close to the EU as it is possible, without being separated from Russia. It shows how the Kaliningrad Region attempts to utilize its position in-between the EU and Russia. Conducted study has demonstrated significance of borderlands as political actors in international relations and importance of analyzing political dynamics related to margins along with state-state dynamics.