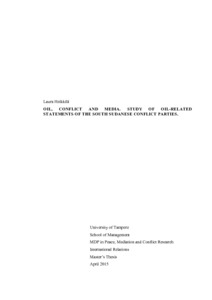 This study focuses on the role of oil in the South Sudan conflict in 2013-2014. The study consists of a description of the history of the conflict and a qualitative content analysis of the statements of the conflict parties, published in news websites Sudan Tribune and Bloomberg. The main conclusion is that oil has a role in the conflict: the government, which receives most of its revenues from oil, finances its war efforts with oil money, which has politicized the meaning of oil in the conflict context and made oil fields strategic targets to the rebels. Whether ensuring the access to oil money is a root cause of the conflict, needs to be researched further. Oil dependence of South Sudan is, however, a serious problem which should be addressed once peace is restored. Regional and international actors involved in the South Sudanese oil industry are in the key position in pressuring the conflict parties to peace.