The Value of a Woman : Representations of Femininity in the Advertisements of Vogue Magazine 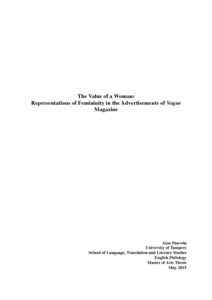 This study deconstructs advertisement images of the British version of the women’s fashion magazine Vogue. It shows how they represent women using the theory of decoding advertisements by media critic Judith Williamson. The theory claims that each advertisement image is constructed of signs, and each sign has a meaning and thus a value of its own. This meaning originates in a construction of connotations called a referent system. The referent system of the feminine gender is deconstructed by using the performativity theory by Judith Butler, as well as the theory of the gaze created by Laura Mulvey.