The evolution of voluntary occupational pensions in Finland and Russia : going beyond public pension provision 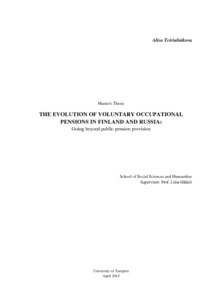 MDP in Comparative Social Policy and Welfare
This publication is copyrighted. You may download, display and print it for Your own personal use. Commercial use is prohibited.

Within the last two decades, being exposed to major social, economic, and demographic challenges, many national pension systems have undergone various transformations. Following suggestions from the World Bank and the International Monetary Fund, many welfare states revised existing pension policies and started encouraging supplementary pension arrangements, particularly promoting the development of private pension savings, as well as occupational pension schemes. However, the degree to which the latter developed varies significantly between countries.

The analysis of evolution of voluntary occupational pension provision in Finland and Russia identified three critical junctures. The first critical juncture is related to the early development of pension systems in two countries in the early 19th. The second juncture concerns the decisions to establish basic and earnings-related pension schemes, which were observed throughout the first part of the 20th century in both Finland and Russia. The third critical juncture is related to the economic crises of the 1990s and the necessity to restructure systems of pension provision.

The study demonstrated certain similarities in the evolution of voluntary occupational pension provision between the two countries, especially in the timeframes of the first critical juncture. Thus, the initiative of employers to provide pension benefits for their employees in both countries had a significant impact on the development of pension provision, and voluntary occupational pension provision in particular, creating the possibility for employers to use pension arrangements as additional motivational tool for retaining staff and getting employees to increase their performance. However, the later trajectories in the development of pension systems in Finland and Russia differed significantly, influencing the degree to which voluntary occupational pension arrangements developed in two countries, and their role in ensuring wellbeing in retirement.