Climate Change Communication : How Concepts are Constructed through Metaphor 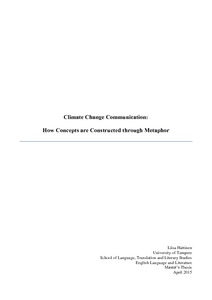 This thesis investigates how concepts of climate change are constructed through metaphor in the American business and news publications Bloomberg Businessweek, Forbes, Newsweek, Time, and The Wall Street Journal. More precisely, this study examines and compares the conceptual metaphors used in conjunction with the terms climate change and global warming; determining if the two terms are viewed distinctively or preferred differently, exploring both the metaphorical language and concepts used to describe them, and suggesting how these concepts both illustrate and formulate people’s opinions, beliefs and actions.

This study utilises the theoretical framework of Conceptual Metaphor Theory that was developed by George Lakoff and Mark Johnson (1980) for the purposes of metaphor analysis. The theory asserts that metaphors operate both at the level of language and at the level of thought. More explicitly, this describes how our conceptual system is paramount in defining our everyday realities.

The methodological framework employed in this study is based on the three-staged approach of metaphor analysis specified by Lynne Cameron and Graham Low (1999). This methodology was further developed to incorporate a fourth stage in order to more effectively accommodate the aims of this study. These stages include; firstly identifying relevant metaphors in the publications examined, secondly grouping these metaphors by the source domains they employ, thirdly identifying and classifying the underlying conceptual metaphors conveyed, and lastly suggesting how these concepts both portray and construct people’s beliefs, attitudes, and actions.

The purpose of this study is to explore the use of conceptual metaphor in climate change communication, both describing how our understanding of climate change may be influenced by the conceptual metaphors we receive, as well as demonstrating how concepts are constructed on a general level, a method that may be applied to any subject matter. The results of this study show that the concept of climate change is constructed through metaphor in a variety of ways, with certain key elements arising in repetition. The concepts portrayed differed between publications, relevant to the interests of the publication in question. The overall sentiment conveyed was one of caution regarding the complex and ambiguous phenomenon of climate change.