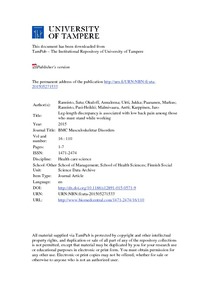 BMC Musculoskeletal Disorders 16
110
This publication is copyrighted. You may download, display and print it for Your own personal use. Commercial use is prohibited.

Some studies suggest that leg length discrepancy (LLD) is associated with low back pain (LBP) but many have not found such an association leading to conflicting evidence on the role of LLD in LBP.
Methods

The study population consisted of meat cutters with a standing job and customer service workers with a sedentary job from Atria Suomi Ltd (Nurmo, Finland) who were at least 35 years old and had been working in their jobs for at least 10 years. Leg length of each participant was measured with a laser range meter fixed in a rod, which was holding the scanning head of the ultrasound apparatus. Association of the intensity of LBP (10-cm Visual Analog Scale) with LLD was analysed by linear regression model, while the hurdle model was used in analysing the association of number of days with LBP and days on sick leave during the past year. Associations were adjusted by gender, age, BMI, smoking, depressive feelings and type of work (standing or sedentary job).
Results

The final study population consisted of 114 meat cutters (26 females and 88 males) and 34 customer service workers (30 females and four males). Forty-nine percent of the meat cutters and 44% of the customer service workers had LLD of at least 6 mm, while 16% and 15%, respectively, had LLD of at least 11 mm. In the whole study population, LLD of 6 mm or more was associated with higher intensity of LBP and number of days with LBP. In the stratified analysis, both intensity of LBP and number of days of LBP were associated with LLD among meat cutters but not among customer service workers. The sick leaves during past year were slightly longer among those with LLD 10 mm or more, but the differences were not statistically significant.
Conclusions

LLD, measured with a laser range meter, was associated with intensity of LBP and self-reported days with LBP during the past year among meat cutters engaged in standing work.