The media usage of children under the age of one: The role of parents as media educators 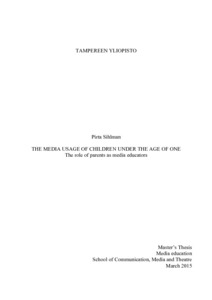 Children today grow up surrounded by media and already small babies have a relationship with the media (mediasuhde). Also the media environment of small babies is expanding, very fast. There are drool-proof iPhone and iPad covers, iPad holders for cribs and infant car seats, as well as baby bouncers with MP3 and smartphone plug-in systems available for babies today. Media provides not only entertainment but also communication and socializing channels for parents as well as children.

This study investigates the media use of babies under the age of one and the role of their parents as media educators. I plan to answer the following research questions: How does a baby under one year of age consume media? What kind of role do parents play in the media usage of babies and what kind of responsibility do the parents have?

This research is a qualitative multi-method audience study. The data was collected in January 2015 using interview and observation methods. Four families were used as case examples in this study.

The findings in this research show that babies under the age of one indeed do use media already at such a young age. This research shows that babies observe from the side their parents' media content, babies like to touch tablets and their favorite media are: books, TV and smartphones. This research shows that babies already have their own taste in media content. Parents in this research perceive their role as media educators as something very important. Parents regard their main role, as a media educator is to protect guide but to also encourage their children try new media technology and explore their media environment.

Based on the results I conclude, that already small babies have their preferences in terms of media content and that their media environment is rather broad. My second conclusion is that it is very important for parents and other adults in a child's life to recognize their role as media educators and support, regulate and guide the child in the media environment.