The Hobbit Adaptation : Literary Infidelity or True to the Tolkien Spirit? 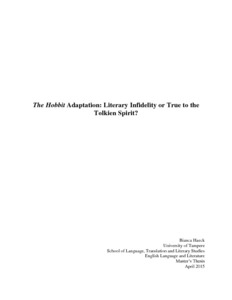 This thesis examines the adaptation of The Hobbit (1937) into film through the use of adaptation theory, authorship, and reception theory. The use of adaptation theory sets out to show the process of story transfer between media, and authorship seeks to find who is truly considered to be the “author” of the new finished work. Through the use of reception theory, the goal is to determine the target audiences, and how such audiences influence the adaptation, and in turn, the reading or re-reading of the original source material.

The scope of this thesis focuses in particular on changes and additions made to three characters: Azog, Tauriel, and Thorin Oakenshield. Azog is examined through reception theory, authorship and adaptation fidelity as an unnecessary character resurrection that over-shadows the more practical use of his son Bolg, who is present in the actual story. Thorin Oakenshield’s character restructuring is examined from authorship and reception theory as both Tolkien and Jackson’s team “re-master” his character into the central hero through use of the appendices at the end of The Lord of the Rings (1954). Finally, Tauriel is viewed from an authorship, adaptation fidelity, and reception theory stance, as she is not of Tolkien’s creation (rather Jackson’s team), and how her role made her a new main protagonist, changing the entire story.

The goal of this thesis is to explore how such changes affect views on the original source material. The reason such a focus is important in literary studies terms is that once an adaptation has been viewed, by either carry-over fans or entirely new fans, our “horizon of expectations” (as coined by Hans Robert Jauss) now includes the paratext of the film adaptation. This inevitably changes the reading of the book in turn. In this way, adaptations are important to examine as they do affect the original source text in some way, since no matter how the adaptation turns out, it will always bring the discourse back to the original, breathing new life into it.