The current state and future forms of Russian music magazines 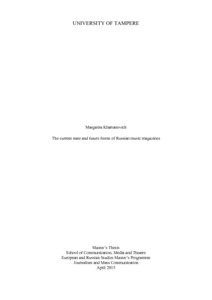 This Master Thesis aims to reflect the current state of Russian music magazines, identify the reasons for the lack of their success and discover appropriate remedies, such as the form, content, audience or writers. The year 2008 was a significant one for the structure of the media in Russia: media management cut the staff, closed some magazines and newspapers and shortened the issues of others. This shift ignited serious debates amongst journalists, publishers and music experts about the future of Russian music magazines. Some argue that there is no future for them at all; others suppose that it will take the form of an online journal in the manner of Pitchfork.

A study on Russian music magazines is of particular interest because print might be dying in music journalism more rapidly than in any other niche media. Music press is not only market dominated and cannot be solely explained through the market logic and finances. It depends largely on both generational characteristics and the surrounding environment.

The main theoretical framework of this study lies on Pierre Bourdieu s field theory and Aristotle s classification of causes in order to give an instrumental, functional, and strategic view of the subject. It provides a deeper insight into the complexities of the problem, bettering answering the questions of "How?" and "Why?"

While the main focus of the research is on the reasons for an unsuccessful nature of Russian music magazines, the study suggests their future forms that could succeed in Russia in the long run.