Monitoring bullying behaviours may not enhance principal's awareness of the prevalence 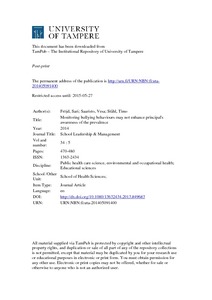 School Leadership & Management 34 5
470-480
This publication is copyrighted. You may download, display and print it for Your own personal use. Commercial use is prohibited.