Understanding the Persistence of the Nkonya-Alavanyo Conflict: An Nkonya Perspective 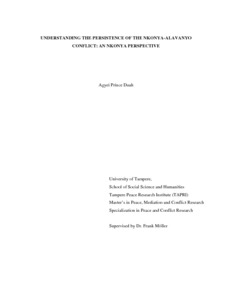 This thesis, Understanding the Persistence of the Nkonya-Alavanyo Conflict: An Nkonya Perspective, is an investigative enquiry into the reasons why in spite of all efforts to solve the conflict between Nkonya and Alavanyo of the Volta Region of Ghana, the conflict has persisted to date.

To do this, an ethnographic field trip was taken to Nkonya-Tayi where in addition to observations, open ended interviews were conducted. Among the themes sought during the interviews were the causes, effects, attempts at solving the conflict and most importantly why it has remained persistent.

Apart from the ethnographic interviews, other sources both primary (court judgments, official letters written in relation to the case, press releases among others) and secondary (books, book chapters, articles, lecture notes, as well as online documents) were also looked at.

The data gathered from observation and interviews which were mostly recorded was transcribed and then synchronised with the existing theoretical literature particularly the work of Azar on Protracted Social Conflict and other related literature to produce results.

The conclusions deduced thereof suggest that according to the Nkonyas, the conflict has remained insoluble primarily because of human need factors made manifest in the land question and its related issues such as security, justice and peace among others which have not been well attended to over the years.