Migration in the Mediterranean: Media Portrayals of Refugees and Migrants 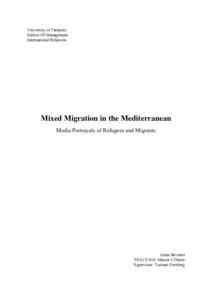 Mixed migration in the Mediterranean has since 2013 increased significantly leading to an unprecedented amount of deaths at sea. For the first time in 2014, over half of the people crossing the sea were refugees. The Mediterranean has not only come to be referred to as a graveyard, but it also represents a border zone dividing people and worlds, one in which the inherent conflict between national security and human rights is sadly depicted.

The present thesis sets out to analyse how migrants and refugees, and migration and asylum, are portrayed in news articles and photographs published in the newspaper Helsingin Sanomat during 2013 and 2014. The focus is on the Central Mediterranean, covering mixed migration movements from Northern Africa to Southern Europe. By utilising ideas put forth by the Copenhagen School's securitisation theory, Jef Huysmans' security framing approach and the linkage between security and visual communication, the research seeks to understand how refugees and migrants are portrayed, and more specifically, whether refugees and migrants are portrayed as primarily a security concern or a humanitarian concern.

A content analysis of the articles was conducted, and the quantitative data together with more qualitative analysis indicated that while both security and humanitarian perspectives are recurrent, the security perspective has more emphasis. This is done by portraying migrants and refugees negatively and linking them to illegality, and portraying them predominantly as numbers and passive agents. Together with the former, the lack of individual accounts from migrants and refugees renders them an anonymous mass, which portrays them as security concerns instead of highlighting their individuality, rights and distress. The results support the general tendency to invest in security responses over humanitarian ones when reacting to mixed migration.