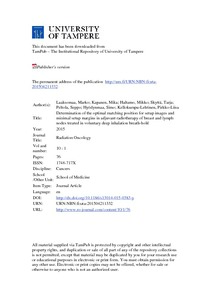 Adjuvant radiotherapy (RT) of left-sided breast cancer is increasingly performed in voluntary deep inspiration breath-hold (vDIBH). The aim of this study was to estimate the reproducibility of breath-hold level (BHL) and to find optimal bony landmarks for matching of orthogonal setup images to minimise setup margins.
Methods

1067 sets of images with an orthogonal setup and tangential field from 67 patients were retrospectively analysed. Residual position errors were determined in the tangential treatment field images for different matches of the setup images. Variation of patient posture and BHL were analysed for position errors of the vertebrae, clavicula, ribs and sternum in the setup and tangential field images. The BHL was controlled with a Varian RPM® system. Setup margins were calculated using the van Herk’s formula. Patients who underwent lymph node irradiation were also investigated.
Results

For the breast alone, the midway compromise of the ribs and sternum was the best general choice for matching of the setup images. The required margins were 6.5 mm and 5.3 mm in superior-inferior (SI) and lateral/anterior-posterior (LAT/AP) directions, respectively. With the individually optimised image matching position also including the vertebrae, slightly smaller margins of 6.0 mm and 4.8 mm were achieved, respectively. With the individually optimised match, margins of 7.5 mm and 10.8 mm should be used in LAT and SI directions, respectively, for the lymph node regions. These margins were considered too large. The reproducibility of the BHL was within 5 mm in the AP direction for 75% of patients.
Conclusions

The smallest setup margins were obtained when the matching position of the setup images was individually optimised for each patient. Optimal match for the breast alone is not optimal for the lymph node region, and, therefore, a threshold of 5 mm was introduced for residual position errors of the sternum, upper vertebrae, clavicula and chest wall to retain minimal setup margins of 5 mm. Because random interfraction variation in patient posture was large, we recommend daily online image guidance. The BHL should be verified with image guidance.