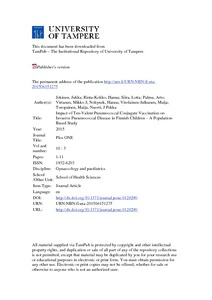 The ten-valent pneumococcal conjugate vaccine (PCV10) was introduced into the Finnish National Vaccination Program (NVP) in September 2010 with a 2+1 schedule (3, 5, 12 months) without catch-up vaccinations. We evaluated the direct and indirect effects of PCV10 on invasive pneumococcal disease (IPD) among children ≤5 years of age during the first three years after NVP introduction.
Methods

We conducted a population-based, observational follow-up study. The cohort of vaccine-eligible children (all children born June 1, 2010 or later) was followed from 3 months of age until the end of 2013. For the indirect effect, another cohort of older children ineligible for PCV10 vaccination was followed from 2011 through 2013. Both cohorts were compared with season- and age-matched reference cohorts before NVP introduction. National, population-based laboratory surveillance data were used to compare culture-confirmed serotype-specific IPD rates in the vaccine target and reference cohorts by using Poisson regression models.
Results

This is the first population-based study investigating the impact of PCV10 introduction without prior PCV7 use. A substantial decrease in IPD rates among vaccine-eligible children was observed. A smaller and temporally delayed reduction among older, unvaccinated children suggests that PCV10 also provides indirect protection against vaccine-type IPD. Changes in serotype distribution warrant continuous monitoring of potential increases in non-vaccine serotypes.