Eye Contact Perception in the West and East: A Cross-Cultural Study 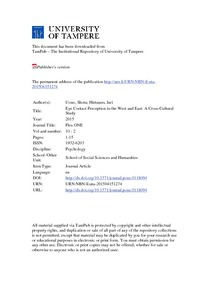 This study investigated whether eye contact perception differs in people with different cultural backgrounds. Finnish (European) and Japanese (East Asian) participants were asked to determine whether Finnish and Japanese neutral faces with various gaze directions were looking at them. Further, participants rated the face stimuli for emotion and other affect-related dimensions. The results indicated that Finnish viewers had a smaller bias toward judging slightly averted gazes as directed at them when judging Finnish rather than Japanese faces, while the bias of Japanese viewers did not differ between faces from their own and other cultural backgrounds. This may be explained by Westerners experiencing more eye contact in their daily life leading to larger visual experience of gaze perception generally, and to more accurate perception of eye contact with people from their own cultural background particularly. The results also revealed cultural differences in the perception of emotion from neutral faces that could also contribute to the bias in eye contact perception.